Ever Since The First Aircraft was invented by the Wright brothers in 1903, the aviation industry has undergone tremendous innovation and development. Air travel has almost become a primary mode of transport for all people across the world, especially when traveling long distances. Since Air travel reduces travel time and also provides a wide array of comfort, it became a preferred travel mode for countless people across the world.

If looked back through history, from the first flying aircraft model made by the Wright Brothers to the more sophisticated commercial aircrafts available at present, the evolution of the aviation industry is nothing short of a marvel. But now you must be curious to know when and where the first commercial flight took place,

It should not be shocking to know that the first commercial flight journey was made only in the United States on January 1, 1914. It was just a few years before the first world war. The first commercial flight journey took place between St. Petersburg and Tampa for 23 minutes, covering 21 miles over bay waters. The plane just flew at a steady altitude of 15 feet across the bay waters throughout its journey. It was a Two-seater aircraft Benoist XIV, a two-seater with a small cockpit. The plane was operated by Pilot Tony Jannus with one paying passenger.

There was an auction held for the seat on this inaugural flight between the cities, with people bidding large amounts of money for the only seat on the aircraft. The winner was Mr. Abram Pheil, who paid the price of $400, which would be over $5000 in today’s currency value. Mr. Pheil was the former mayor of St. Petersburg and was very eager to take this first flight of the St. Petersburg-Tampa Air Line.

While this flight was a historic event, it wasn’t until after the Second World War that commercial aviation came down in price. The United States had created manufacturing plants that were capable of making commercial aircraft affordable enough to allow for air travel for everyone. This was a big change from the beginning of the aviation era. With planes being able to be mass-produced, more companies could compete with one another for customers and destination cities. Airports began to spring up all over the country, allowing people to go from city to city with more ease than ever before.

All of this was made possible by that first flight in 1914 by Tony Jannus in his Benoist airplane, his passenger by his side. Without that historic flight and the buzz generated by the auction for that seat, the idea of flight as a way to travel might have taken even longer to develop.

Now you know the astonishing story of the first commercial flight in world history, and how it revolutionized the aviation world that we are witnessing currently.

Top 10 Avionics Companies in the world 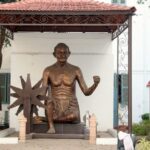